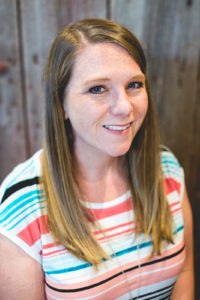 Tracy joined The Pregnancy Care Center in May of 2017 as the Director of Education, taking “Positive Choices” into local schools, churches, and organizations. In February 2019, she was named Executive Director of The PCC after serving as Interim ED for a couple of months. She is a highly relational leader that has a heart for the mission and vision of The PCC.

She was born and raised in Oklahoma City, but the Lord gradually moved her north! She attended Ozark Christian College and Missouri Southern State University in Joplin, MO where she attained an associates in Biblical Knowledge as well as her bachelors in Secondary Education (Math). After graduation in May of 2006 she began working full time in Student Ministry at Northeast Christian Church in Rockford, IL and spent the next ten years there.

She met her husband, Danny, at Northeast and they got married in May of 2009. They now live in Rockton with their two boys Garrett and Connor. Tracy is extremely extroverted and loves people, competitive Catch Phrase, Diet Coke from McDonalds, sports, and laughing at her crazy sons!

Grow through what
you go through.